Have You Ever Heard of Lemongrass?

Lemongrass is a herb of many purpose uses. Its leaves and the extracted oil are commonly used in aromatherapy (using aroma from the plant for healing and cosmetic purposes).

The plant is native to tropical countries like India, China and Thailand. It flourishes in hot climate, rich and well-drained soil.

Recently we met a young entrepreneur in Meghalaya, Bah Besterly Marwein, who grows Lemongrass, so we set out to visit his farm and know more about him.

Zizira explorers go out on field trips to various corners of Meghalaya to discover unique, exotic plants and fruits that grows in this pristine place. You can read about our field trips here.

For now, let’s talk about Bah Besterly.
(By now you will know that ‘Bah’ is a respectful way to address men in Khasi local language.) Our Journey to a Farm in Byrwa

The farm is situated at Byrwa,in Ri Bhoi District, Meghalaya. We set out to visit this farm at 6:30am from Shillong. It took us 1:30 hours reach the farm. Our journey started with a drive through a poorly, bad condition. This did not deter us as we were more intrigued to see the farm and know about his story! He started off as a Coal Mine Owner. He also buys and sells land as means of income. But when Coal Mining was banned in Meghalaya, he had to find ways to make ends meet.

He met up with some friends who are scientists and they recommended that he cultivate aromatic crops because it is in demand in the market and very profitable as well. He tested it on a small land and saw that lemongrass was prospering and then gradually started with much bigger land.

With no formal education or knowledge about agriculture or lemongrass plantation, he just started off with good faith with the hope of achieving success. He went for training to Lucknow to get better knowledge on plantation for his farm.

Now he grows Lemongrass, Geranium, Vetiver, Palmarosa and many more such plants in his farms. He also bought machines to extract oil from the crops and sell it to the market. With the help of the Government’s Initiative ‘Aroma Mission 2019’ that was launched by Chief Minister Conrad Sangma, he was further able to expand this venture to many districts and blocks. Bah Besterly started lemongrass plantation only about a year ago. He and his family member would cultivate them in his own farm.

Now there are more Government schemes like convergence scheme that helps the farmers a lot and the village as a whole and providing awareness and training to the local farmers who are interested in venturing into aromatic plants.

There are more farmers who are working with him in many districts in Meghalaya. His network is growing, and more farmers are reaping good benefits from growing aromatic plants.

Plantation of Lemongrass at the farm is done naturally. There are no added pesticides to boost plantation. Meghalaya’s high altitude, climate and rains provides favorable conditions for the growth of this plant.

This plant is harvested between the months of April to December. The farmers would cut the grasses and extract the oil with the machines set up in the farm itself.

Bah Besterly told us that the best time to extract the oil is during the rainy seasons. They usually wait for two to three hours after the rain stops before they start cutting for extracting of oil from the grasses.

How Is Oil Extracted From the Crops? The farm has its own oil extraction machine called Essential Oil Distillation Unit. This machine not only extracts oil from lemongrass alone but from other crops too such as turmeric leaves, geranium and more.

Plants are cut and are placed on the top of these machines. The lid is closed tight, and they would boil water underneath the machine. Once evaporation starts, the vapors are collected in the condenser and the oil from the plants trickles down from it. 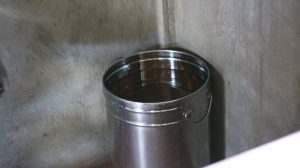 The oil from farm is sold to people in Kolkata, Lucknow and Delhi.

Bah Besterly informed us that loves to help other farmers setting up their oil processing unit. He provides training to anyone that wants to install the machines in their farm.

Traditionally lemongrass is used as a flavoring agent in food, drinks, desserts and products like oils, gels, lotions, candle making and so much more.

Isn’t it wonderful for one plant to take so many forms?

Because lemongrass oil has a powerful and citrus scent, it is also used for both medical and cosmetic purposes. You can even find them in soaps among the most popular essential oils for its wide variety of applications.

Lemongrass is also used to make to make flavorful and refreshing tea. It is a well-known beverage because of its various health benefits. Zizira’s Fit Tea and Classic Masala Chai also use lemongrass. You should try them out and enjoy the flavor. Besterly’s dreams are big! His future is to expand and make products out of the oils. He wants to increase his production, bring awareness to the farmers about the aromatic crops and how they can take advantage of the market. His message to the farmers is that more farmers should venture to planting lemongrass and other aromatic plants as there is a market and it brings good revenue. The government is also encouraging and will support them. He doesn’t want the farmers to stop traditional cultivation to feed their families but to instead look at waste lands as an opportunity to grow these crops. He has seen farmers growing the crops on waste lands and saw positive results. Growing lemongrass and crops like these not only prevent soil erosion but also revive the land and helps the environment as whole.

Zizira strives to make natural products, by partnering with farmers with such wisdom and entrepreneurial spirit.

Bah Besterly’s story inspires us, and we know that he is making a difference to the farmers and people around him.

Has Besterly’s story inspired you too?

Drop in your comments below.

Each Trip Expands Our Network: A Visit to Lawbah Village
Next Post: Bee Keeping in Thad Village