How is Ri Khasi' – the Khasi Country – of Meghalaya so blessed a land, pouring with milk and honey, abounding in greenery and inexhaustible natural wealth, admired by many?

Clean air, pristine forests, clear streams and balmy climate are the permanent features you see whichever direction you look in. Truly, this is 'Ka Ri ba ieid ki blei' - the country that the gods love. That’s what our Grand aunt told us, a great storyteller. On many evenings we gathered around her to listen to fascinating tales, 'when human beings and animals, rocks and plants spoke one language'! Around the hearth, we sat and clung to her every word, till the last ember died.

Among the tales Grand aunt told us, was one about the three sacred mountains that still stand sentinel today. Like the three stones of the hearth, the three mountains complement one another, said Grand aunt.

The stories woven around them- Lum Sohpetbneng, Lum Diengiei, and Lum Shillong- reflect the ethos - morals, pathos – emotions, and logos - reason, of every Khasi's life on this earth.

Sohpetbneng—Heaven's Navel, Where the Khasi Nation Was Born

Long, long ago in the golden age when people’s hearts were still pure, complete harmony reigned and peace and plenty abound, both in heaven and on earth. People lived in paradise and travelled daily up and down 'Ka Jingkieng Ksiar' - the golden ladder – that connected heaven with earth on U Lum Sohpetbneng (Lum - pronounced ‘loam - means mountain, sohpet means navel and bneng mean heaven). The air resounded with song and laughter as the happy folk tilled the vast and verdant fields of Mei Ram-ew - Mother Earth. These tillers were 'Ki Khadhynriew Trep Ki Khadhynriew Skum'—the Sixteen Huts and Sixteen Nests, the original Khasi clans folk. By and by, dissidence began to surface. Bit by bit, disobedience became commonplace. Sin inched into people’s hearts. God became so displeased that he decreed the golden ladder be severed forever, asking the clans to choose between heaven and earth.

Nine clans opted for heaven and seven decided to stay back on earth. These were Ki Hynniew Trep Ki Hynniew Skum – the Seven Huts and Seven Nests, the original settlers of the earth, and progenitors of the Khasi nation today.

Despite their transgressions, the Creator continued to bless the seven clans with every good thing.

Thus, to this day, on every second Sunday of February, Khasis of the indigenous faith make their annual pilgrimage to the sacred mountain. They trek the arduous, four-kilometre climb to the summit, 1343 metres away. Up there, mindful of their origins, they pay obeisance to the Creator God, beg pardon for their transgressions and beseech him for his blessings to continue.

Legend of Diengiei- the Giant Tree

Sinful though man was, God still loved the world and continued showering every manner of blessing. But as people prospered, arrogance heightened and ingratitude invaded their hearts. Wickedness became their way of life. Infuriated, the creator decided to teach them a lesson. He caused a gigantic tree to take root on U Lum Diengiei, the 1902 metre high peak west of Sohpetbneng. The giant tree grew quickly, spreading its roots and branches far and wide, covering the entire earth. The foliage was so thick that sunlight could not penetrate through. Darkness pervaded the nation, plants and animals died. Total misery overtook life on earth. Men cried but God did not relent. They realised God wanted them to find their own way. So, one day they convened a meeting wherein they decided to cut the tree down. They toiled the whole day but could not finish the work because the trunk was monstrously massive beyond imagination. They had no choice but to rest for the night.

The next morning, however, they discovered to their horror that the trunk had grown back to its original shape and girth with not a single axe mark was on it. Puzzled, they resumed axing. Evening came yet they weren't even halfway through. They rested.

The second morning they again found the tree as good as had never been axed. The same thing happened for many months till one day. A little bird, the phreit, told the men she knew why and how the trunk grew back in the night. She would reveal it to them if they allowed her to eat whatever she wanted from the fields. The men agreed.

The phreit then revealed the secret. Every night as the men slept, a huge tiger would come and lick the trunk. Magically the cuts healed and the trunk fleshed up again. So no matter how much they axed, they would never succeed unless they outwit the tiger. The men brainstormed together and hit upon a novel plan. That evening after work they left their axes with blades facing outwards all around the tree trunk. As usual, the tiger came. This time, however, the sharp blades cut his tongue. The tiger fled away in pain, leaving the trunk as it was. He never returned.

The next morning the men found to their relief their strategy had worked and the trunk hadn’t grown back. They then continued peacefully cutting the tree. Several days later, the giant tree came down with tremendous tremors that shook the earth around. The accompanying thunderous sound of its fall could be heard as far north as the great river and as far south as the edge of the mountains.

Till this day on the plateau atop the peak, you can still see the crater where once the giant tree took root.

With the tree felled, sunlight once again warmed the earth and fresh life regenerated. Bees buzzed and birds chirped again, reviving plants and herbs of every kind. Animals once again roamed the fields and forests. Man learned his lesson and vowed to live righteously from then on. 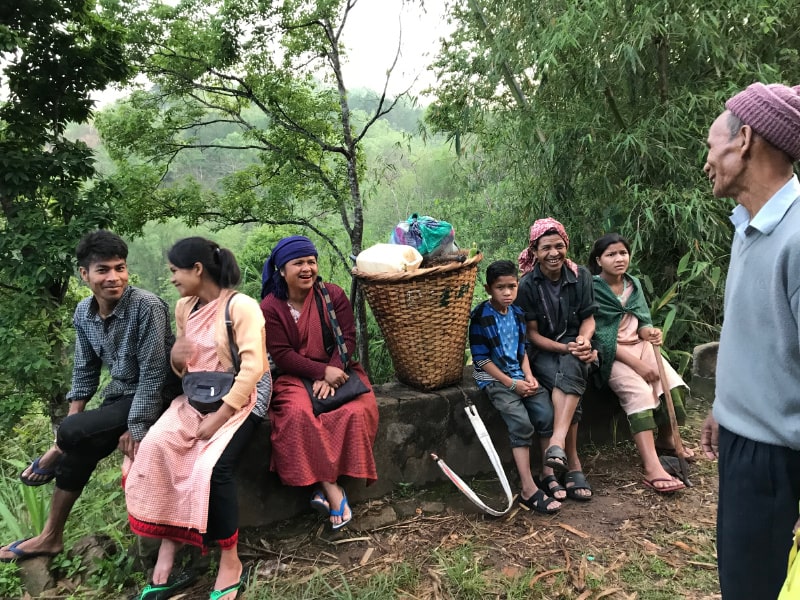 Towering 1966 metres above mean sea level stands U Lum Shillong or Shillong peak, the most well-known among the three sacred mounts. Khasis believe the peak to be the abode of the benign deity, U ‘Lei Shyllong or the god of Shillong.

Many legends are told of 'Lei Shyllong. One legend has it that the deity actually had no natural origin. U shu long, they say, which means 'he (the god) just happened'. The epithet later became U Shyllong. The god's birth was a miraculous one. A virgin named Ka Lir who lived in a village in nearby Mylliem gave birth to him but the child was stillborn so Ka Lir buried him under the ground.

Years later, late one night, a huge crowd of people gathered outside Ka Lir's hut, accompanying a handsome young man she had never seen before. He revealed that he was God, that baby she buried underground many years ago and Ka Lir was his earthly mother. Time had now come for him to be with his people to promote the rule of justice, peace and prosperity if they would follow his guidelines.

That is how the city of Shillong got its name. To this day the indigenous Khasis perform rituals of worship to thank and venerate U 'Lei Shillong and to seek his blessings.

It's not without reason the ancient Khasis told these stories. If those in posterity listen well and perpetuate the practices of their forbears, they will continue to enjoy the blessings. The stories embody subtle commands that are meant to remain etched in the people's hearts and minds.

As they go about their business, the Khasis remain wary of destroying nature too. It is anathema to unnecessarily cut down trees and destroy vegetation and animal life. Much of the forest lands are still protected by the community. They remain reserved and rich grounds for myriads of plant and animal life beneficial in thousand of ways.

Every time you pass by Lum Sohpetbneng you can't help noticing and envying the unspoilt surrounding evergreen slopes and green meadows. Enter mid-city and gaze up southwards towards 'Lum Shillong' and you will see the miles and miles of verdant forest cover cradling the town like the giant lungs. From atop the peak on the western the majestic Diengiei range greets you with its ever shining, emerald splendour.

And so, for generations, the land and country of the Khasis around the three sacred mountains remain as blessed as ever. Its pure air and water, luxuriant forests, and ever fertile soil remain the bedrock that continues to support people's lives and wellbeing.

In the three sacred mountains, the ancient Khasis recognised the indissoluble oneness of everything in nature. To this day, so far, that sacred relationship with the environment around still stays undisturbed.

We need to keep it this way for nature's blessings to continue.

#ZiziraFolklore: Ka Lukhmi – A Mythical Story on How The Khasis Started Growing Rice!
Next Post: The Ethics of Bee Keeping & How Traditional Beekeepers in Meghalaya Do It